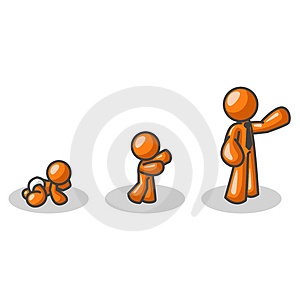 This summer I had a very interesting experience.  I met some amazing people and at the same time some very not so remarkable people, who at the time I thought there was nothing to learn from them, but now looking back there is so much about life to learn from both types of people. I think we focus too much on the amazing people that we meet in life and all the scummy people that we meet we just push to the side and never think about again, but they are some of the people that teach us about growing up.

This summer I met a very interesting person and found myself in some very interesting situations that I think have opened my eyes a little more to the world.  You see I know that I myself am not an easy person to get along with, but when I was forced to work with another of myself I've realized that it is not fun.  While I do like to be in charge I have a way of knowing when to back down; for the last two weeks I was working with a girl who didn't know her limits.  While pushing yourself beyond your limits is a learning experience, there is still a point when you have to take advice from someone else and stop. The girl I worked with just pushed and pushed and she ended up running herself down and wouldn't accept that she had gone too far. Learning to stop is all apart of growing up, but I think this is one lesson she was not quite ready to learn.

I've been told that I care too much about what others think of me. But there are so many times when I just feel that I really don't care at all what people think of me. My biggest problem is when I get to the end of things, its those last few weeks of things that I just let everything go and have that "I'm never going to see you again" thing going.  Perhaps this is not the best approach to life. It really is that I just get frustrated too easily with life. This summer was a very good portrayal of what happens when I get pushed too far. I have been working at the same camp for the past few years and this summer was the first time that I actually really think that I will not be going back.  Every year I say this year will be the last, and yet I keep going back, but this summer my limits were pushed beyond what I can handle.  It must all be in our heads that I just can't see myself doing anything else, after all since 2002 I have only spent one summer away from this camp.

The way that the new staff was treating any one in authority and especially the way that the girl I was working with treated anyone in a position of authority were the straws that broke the camel's back. I know that I have been in the position of hating my superiors but I always listened to what they had to say and did as I was told but to see the way that these 17 year-olds were treating their superiors I was in shock.  We were at a daily staff meeting when it was running late someone stood up in the back and said to the meeting leader, "you have 5 more minutes."  What nerve do these kids think that they have? I feel that we are losing the appreciation we used to have for things.  That everyone just seems to feel that they are entitled to the things that they have. I might just dedicate a whole post to self-entitlement.  But this one is about growing up.

I was having an interesting discussion with a fellow staff member about growing up and when we think that we grew up. There is no set age, no one can say that every 20 year-old is grown up and no one can say that every 15 year-old is not. Because everyone is different. I know that by the time I had hit 9th grade I really grew up. There was a sudden sense of realization that the decisions that I was making would effect my life, and the decisions that I made that year have shaped all the things that have been happening in my life until this day. I am very greatful to my younger self for making those decisions even though in recent years things have not always been the best.  It has all been a learning experience and we all just need to hit the ground running and stop being afraid of taking advice and working with others.  We're in this world together must be for a reason.