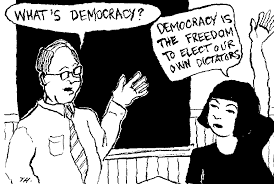 This has been a few months full of politics.  Back in October when I was in the states I filled out an absentee ballot. In that election it turned out that my vote didn't seem to count for anything.  Here we are a few months later with another election today, this time in Israel.  Everyone that I talk to has been making a huge deal about voting and I get it.

We live in a democracy and we should be celebrating our ability to control who is in our government, but has anyone ever sat down to think about what if we don't know who we want to be in our government?  Do we really know who the candidates are? Are they going to keep their promises?  Did they just say those things to get elected?  There are too many questions. And I just don't feel like I have the ability to choose who is going to be put into office. What if you end up making the wrong decision? Over the weekend I read over summaries of the parties that are running and they all made points that I agreed with and I had been hoping that reading over their points on key topics would help me to choose one. Turns out that didn't work.

I kept getting stuck on this feeling. What do I know about foreign policy? I've been living in this country for less than 3 years, heck I lived in the US for 20 years and don't know what to look for in a presidential candidate.  I was reading Seth Godin's blog other day and he had a post about "With great power comes great irresponsibility" and I agreed with his ideas. When we give people power then they can do what ever they want and all you can say is "I can't believe I picked this guy."

If the guy who gets elected turns out to be a terrible person, is it all okay because a majority of people wanted to put him there?  I was too conflicted, a friend of mine said that not voting in a way is a form of voting.  I do want to live in a better world, I just feel like all this politics isn't helping, there is so much lying and just saying things to get the votes. That I don't feel properly informed to make an informed decision. I know there are going to be a lot of angry people about this post, but this is my honest opinion on the situation.
Newer Post Older Post Home