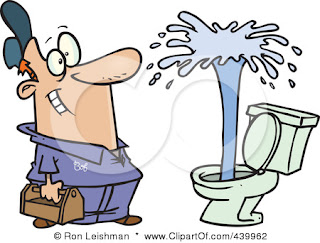 I currently live with two roommates. Neither of them are ever around and last week I got a surprise visit from the land lord.  He said that he hopes its not a big deal and that he's going to send in a plumber to look at it. The next day a plumber comes to check things out. He can't figure out what is wrong and doesn't want to rip up the floor before he knows what is wrong, so he says that over the weekend he is going to bring in someone with a camera to check the situation.

Sunday morning at about 12 I get a knock at the door. Its four guys here to check the situation with the water. After 20 minutes of fiddling with the water on and off and shooting some pictures of the floor, I hear banging and then a saw... they cut up the floor in the kitchen.  But the problem is they can't find where the leak is coming from.  So I'm really hoping that this will be a quick fix once they figure out what the problem is and that they will not leave the apartment a mess, because I still need a shower and to brush my teeth.

At this point my biggest fear is that they will rip up the bathroom wall since there appears to be a leak in the wall and that they will leave the shower and toilet alone. But in this country you never know because they don't even know what they are looking for. It is just a lot of guys yelling at each other about where they think the pipes go. Why do these buildings have to be made of concrete? If they were plaster there is not big problem with cutting a hole and patching.
Newer Post Older Post Home